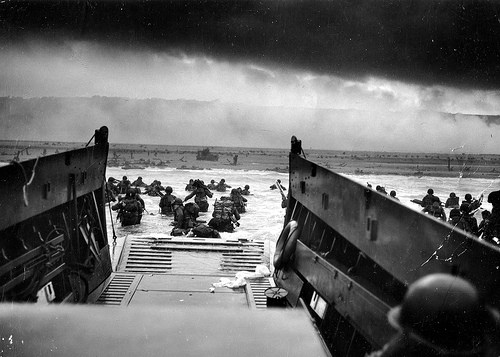 Near Mont Saint Michel the bed & breakfast Les Belles de Mai in Pontorson is ideal for combining tourism and history in one week end on the occasion of the D Day commemorations.

On June 6, 1944, the Allied troops landed in Normandy and changed the course of history.75 years later, June 6, 2019 will be the scene of commemorations near Caen which will be spread over several days before and after D Day.This is a great opportunity for guests to stay in our bed & breakfast near Mont Saint Michel, less than two hours driving from the D Day commemorations.

Find out about the program

We suggest you have a look on this clip

Less known but equally important to the outcome of the conflict, the breakthrough of Avranches allowed to lead Allied troops to the west.

Not far from Pontorson three places of interest can be seen :

Located near Saint James, the American Cemetery of Montjoie Saint-Martin hosts 4,410 American soldiers killed during the military operations of the landing of June4, 1944. Information boards allow you to discover the hightlights of the Battle of Normandy in the region, as well as a hike of about 8 km.

2/ The mausoleum of Mont d’Huisnes

At a distance of 10km from our bed & breakfast in Pontorson you’ll find a unique German Cemetery, the mausoleum of Mont d’Huisnes, located in the village of Huise-sur-mer. True symbol of peace, the place hosts the remains of nearly 12,000 Germans (soldiers but also women and children) who died during the Second World War.

15 km away from Pontorson, a small museum is installed in the city of Pontaubault. François Mutschler was a young Alsation, forcibly conscripted by the Germans, who led actions of resistance. Visitors can discover the life of François Mutschler as well as models, objetcs and souvenirs.