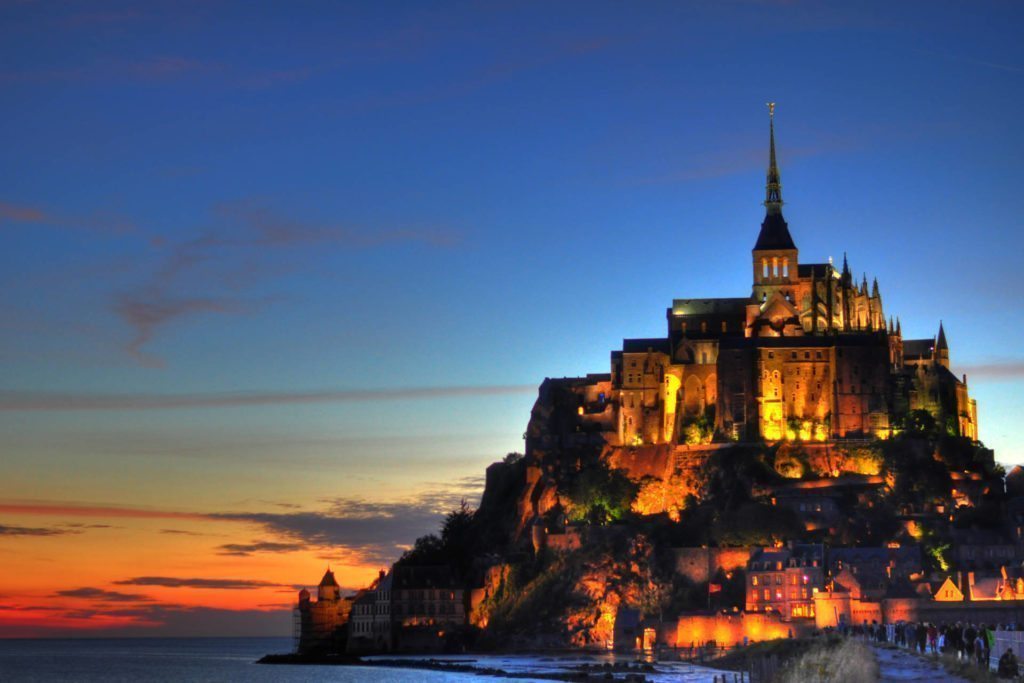 A visit to Normandy would not be complete without spending a few hours or even a day at Mont Saint Michel, close to our bed and breakfast.

Proudly sitting on its rock, the « Wonder of the West » welcomes thousands of visitors and pilgrims every day.

A few minutes drive from the bed and breakfast Les Belles de Mai, Mont Saint Michel appears, proudly facing the Channel. It is situated just in between Normandy and Brittany which are separated by the Couesnon river.

History of an abbey

Originally known as « Mont Tombe » the Mountain is called Mont Saint Michel in 710 because of the oratory dedicated to the archangel Saint Michel by bishop Saint Aubert d’Avranches in 708.

At the approach of the year 1000 the worship of Saint Michel gets more and more intense. In the 11th century, the pre-romanesque abbey of the mountain was replaced by a new one. Its reception facilities made it possible to intensify the pilgrimages. The recent arrival of the Normans and the feudal troubles favor the invocation of the protective archangel. The Duke Richard II of Normandy comes here to get married to Judith of Brittany around the year 1000.

The pilgrimage to Mont Saint Michel gets more and more attractive outside the kingdom of France.

Pilgrims arrive from Italy, Germany and Belgium by roads called « paths of Paradise ». Even pilgrimages of children, with our without permission of their parents, are reported in the fourteenth and fifteenth centuries. They were pushed by an irrepressible force that made them cross all Europe to venate the Archangel in his famous sanctuary.

The pilgrimages will increase until the Hundred Years War, when the English occupation limits access to the rock that will resist the occupant. This resistance will bring even more credibility to the protective power of Saint Michel and the attraction of the mount will reach its peak after the war. The pilgrimage was completed by most kings of France and by the greatest of the Kingdom until the end of the sixteenth century. Nevertheless it was mostly the cas of modest people and children.

Since the end of works started in 2006, The Mont has now gone back to its maritime character which brings even more magic to this unique site classified by UNESCO.

The tradition of hospitality is millenary at Mont Saint Michel… From the Middle Ages, locals welcome pilgrims to their houses and inns, where they find lodging and shelter.

Today, in the 21st century at the guest house les Belles de Mai we also maintain every day the reception of tourists came to stay in our bed and breakfast or our self-contained appartment next to Mont Saint Michel. We give you best advice to make your visit in Normandy a unique and memorable moment.

How to get to Mont Saint Michel

You have several options to get to Mont Saint Michel : by car, by shuttle bus from Pontorson, by bike and even on horseback or across the bay on foot with a guide.

A visit to Mont Saint Michel is interesting whatever the season of the year or the weather of the moment. Once on the spot the points of interest are numerous : first, of course, the visit to the abbey but also the museums and exhibitions without forgetting the Visites-conferences oragnized by the Tourist Office. They are available in English and many other languages.

The possibilites to get something to eat are not lacking, both at Mont Saint Michel intramural and a place called « La Caserne » near the dam and parking lot. In season, do not forget to taste the salted lamb meat and the famous bouchot mussels.

What is there to discover ?

The Bay of Mont Saint Michel is the scene of the largest tides in Europe. This striking spectacle takes place a couple of times per year, when, according to the legend, « the sea rises at the speed of a galloping horse ».

For more information and the latest news, please visit the website of the Tourist Office.

In addition and to complete your visit to Mont Saint Michel you can go to the scriptorial in Avranches to admire the manuscripts and documents. This site is just a 20 minutes drive from our bed and breakfast and will open its doors again in late April 2019. Want to see more ? Go to Saint Malo, Granville, Cancalle or have a relaxed day on the beach !